Sidoniya – Lord of the Chefs 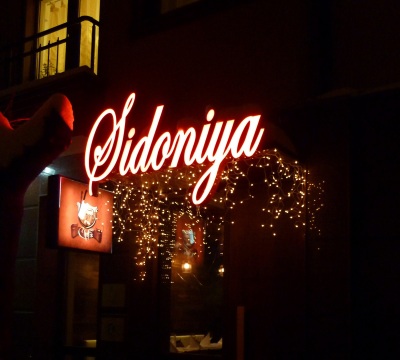 I feel pretty good about this restaurant review because this restaurant is associated with a Bulgarian television show called Lord of the Chefs. Sidoniya was the winner of this program. Other than those two bits of information, I have never seen the show, so I have any opinion or prejudice towards her; I am writing about the food. I am not a fan of reality TV and despite what Bela magazine wrote about me in an interview,  I don’t watch Top Chef or any other food reality programs. I just don’t like them and the Food Network in the United States, with the exception of a few shows, but in general it just rub me the wrong way. 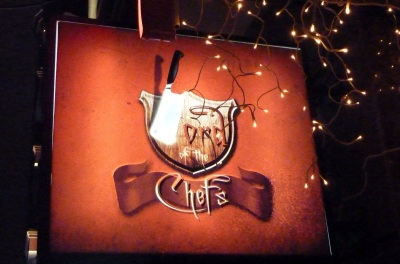 My friend Sally suggested that I might want to check out this new place Sidoniya. I am always eager to try and find a worthwhile dining experience in Sofia and they seem to be few and far between. A rare occasion presented itself, my husband and I were in Sofia together on a Friday night with reason to celebrate. We found out that we would be welcoming our first son at the end of May!  Because I am dining with my husband, he hates me taking pictures while we eat, which is a reasonable request, but I did manage a few snaps.
The décor was modern as most new places in Sofia are. There were some interesting design choices, like using laminate wood flooring on the walls as wooden panelling, which kind of worked. There were some cut out panels hanging from the ceiling to divide spaces and add visual interest, which could have been avoided. Overall, the place had an interesting vibe, it reminded me of restaurant we would have found in our old Astoria, Queens neighborhood; it was my husband that pointed it out to me.
When we arrived something was off, and we couldn’t put our finger on it.  The waiter was pleasant when he greeted us, showed us to our table and took my coat.  We sat down, he lit a candle and poured us each a glass of water, with out having to order it, then handed us our menus, which were handwritten. He then proceeded to bring out a complimentary starter platter of cured meat, olives, breadsticks, bread and butter. As we perused over the menu, the waiter was hovering near us and intelligently answering our questions about the food and wine menu.  He actually seemed to enjoy having an knowledge about the wine list and making recommendations. Although, the wine he suggested was not available, we still had a remarkable service experience.

The menu is rather ambitious.  I have to question some of the higher-end items like Kobe beef and bison.  I can’t imagine that these items have a huge turnaround.  At 136lv and 148lv respectively, very few people can afford to order these things with any regularity.  This leads me to believe that to store the meat for any period of time, they would need to be frozen, but if they are ordered they then need to be quickly thawed, which will severely deteriorate the condition of the meat.  While I can not confirm that this is in fact the case, the meat will only stay fresh in the fridge for so many days, unless they are being dry-aged, but wouldn’t it be listed as a selling point? 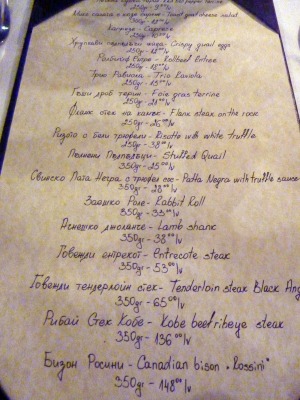 To start, I had the Cream of Cashew Soup with Chicken Teriyaki and Angel had a Tropical Fruit Salad with Shrimp.  When the soup arrived, I was impressed by the serving bowl selection and overall presentation.  What was even more surprising was that I like it. In general, one of my favorite foods is a satay sauce.  If I happen to finish my chicken or beef skewers, then I will find carrots, cucumbers or something to sop up the remaining sauce.  This soup reminded me of a drinkable satay-like soup, with little bits of chicken inside and a side of chicken skewers, which I dipped in the soup. The flavors were balanced, only slightly under salted and bright. If you are not a fan of satay sauce, then this soup might not be for you.

My husband had a tropical fruit and shrimp salad which he enjoyed.  Normally, he is not a fan of sweet and savory combinations, but he was impressed.  I had tasted a bit of the lettuce to get a feel for the dressing, which had a nice flavor.  He said that the shrimps were cooked well and had a decent texture.

Being pregnant, my husband let me choose two entrees and he would eat whichever one I didn’t want so, I ordered Duck Confit and Stuffed Quail.  When they arrived I stuck with the Duck Confit.  I felt I was taking a real gamble with the duck because the last time I ordered a “duck confit” at Opera, it was a roasted duck leg that was so tough I could have broken a tooth (Opera is no longer in business.  It has been replaced with Si.Da.Yes).  The duck was  quite tender, but a bit dry.  It could have been a tad more succulent, but not bad flavor.  It was served over a bed of mashed potato, surrounded by a ring of slice tomatoes.  This was my only issue with the dish.  My husband and I were arguing at the table because I refused to eat the tomatoes and he thought I was being ridiculous.  My argument is that tomatoes are out of season and were most likely stored improperly in a refrigerator (as Bulgarians tend to do, rather than at 55F/12.5C for optimal texture and flavor).  I told him just by looking at them they were mealy and flavorless.  The waiter jumped into the conversation and assured me that they were fresh tomatoes and that they had their own greenhouse, which supplied them.  On the spot, I put one in my mouth and smiled at the waiter.  It was a gross tomato.  I was annoyed that the waiter jumped into our tomato debate. What I wanted to tell him was that tomatoes are sunlight determinant not temperature determent, so in the winter, even if they are grown in a green house, they will not have the necessary sunlight to achieve any real flavor.  Even if they used hot lights or some other heating/lighting source, what a waste to electricity and resources to produce a truly substandard tomato.  Bottom line: EAT SEASONALLY.

To be fair, the first time I had Stuffed Quail was at Chez Panisse.  From now on, I am unable to judge a Stuffed Quail without holding it to the Chez Panisse version.  I found that the quality of the quail was rubbery and not well cooked.  It was stuffed with a slice of ham, dried fruits and some other things, which I forget.  The outer skin was not golden or crisp.  My husband thought it was OK, but I was not enthusiastic about the dish by any means.  I would have approached the dish completely differently.

Angel finished with dessert.  I am not sure what he ordered because it was suppose to be something with chocolate and caramel, but it tasted more like a Reese’s peanut butter pie, which isn’t a bad thing.

Overall, we like the restaurant and would return. Maybe the next time I won’t be pregnant because this was the first restaurant or place in Sofia that I found to serve Hendrick’s Gin, which is like Christmas in your mouth.  I am looking forward to a Hendrick’s G & T!